The Philippine Educational Theater Association (PETA) is bringing back Rody Vera’s provocative, relevant, and heart-wrenching anthology drama on HIV, Under My Skin, directed by Melvin Lee! Although the play’s run was cut abruptly because of the COVID-19 lockdown in March 2020, PETA revamps the play from stage to video, in partnership with esteemed HIV advocacy organizations LoveYourself PH and The Red Whistle, and UNILAB, Inc., PETA’s major co-presenter. Under My Skin is inspired by real people and events, and it accurately depicts the realities, triumphs, and struggles of people living with HIV, while navigating an important conversation about acceptance and tolerance. The show introduces us to a number of characters – Jonathan, Greg, Syd, and Mario whose relationships are tested when Jonathan gets infected; Dino, an HIV-positive teen whose status is discovered through a contraction of tuberculosis; Mary Rose, a mother who unknowingly passed down the virus to her son after getting it from her husband; a gay beauty parlor employee experiencing work-related discrimination, and more. Their stories of love, pain, and acceptance are revealed through Dr. Gemma Almonte, who is studying the spread of the devastating virus.

Two weeks before the closing of Under My Skin at the PETA Theater Center in March 2020, PETA and other theater groups were forced to stop their shows because of the onset of the COVID-19 pandemic. Director Melvin Lee recalls how the lockdown was a blow for this play, especially since Under My Skin had been experiencing a steady rise of good traction.

“Nakakapanghinayang. In fact, I was in denial that the pandemic was happening. There were many good reviews and feedback, and people were talking about it,” Melvin Lee says.

Despite this, PETA remained hopeful that Under My Skin would soon have the chance to pick up where it left off. By January 2021, this hope came to fruition, as PETA was able to gather the cast and staff of the play for closed-door filming, although there were difficulties due to the limitations caused by the pandemic. “We didn’t have the luxury to shoot as much as we wanted. There was a curfew then, and we had to do a lot of pre-production work to prepare for the shoot and follow health protocols,” shares Lee. “Actors are more concerned with the new medium, but in terms of the intention and the style, I tried to capture how it was originally on stage, with all the limitations we’ve had.”

Even though many people are missing live performances, Under My Skin Online is proof that a new window opens when a door closes. “In live performances, you see the unfolding of a scene right in front of you, but you are coming from one position in the theater. Now that it is on video, you get closer to the scenes and actors because of all the types of shots,” says Melvin. Because of the technology and medium, audiences are given a different lens on the play. “Even if you are seated and watching from a gadget, the scenes seem to get closer to you.” 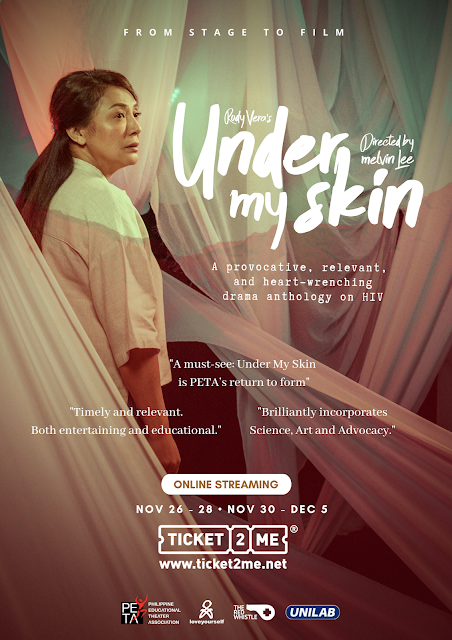 PETA looks forward to Under My Skin Online reaching a wider audience. The PETA Theater Center has a seating capacity of around 450 people per show, but bringing the play to video enables PETA to tap more audiences who may not have seen the show in its original run. “Based on the reception that we’ve had since the announcement of Under My Skin Online, there’s a good indication that it will be received well,” says Melvin.

The timeliness of Under My Skin Online hits two birds with one stone. Currently, the world is still struggling through the COVID-19 health crisis, but the numbers of HIV cases are also alarming because they have not ceased to increase. “In fact, the number jumped during the COVID-19 pandemic,” reveals Melvin, as he refers to how testing and treatment for HIV has become more difficult in the pandemic.

“It’s one issue that we might think is well-discussed. We may even think that people are already well-informed about it, but when you look at the numbers, it shows that we still have more to do to spread awareness and education.”

The HIV issue is another health crisis that people should be aware of, which is why PETA encourages audiences to watch the play on video. In a time when the arts push to thrive amidst all the restrictions of lockdown, PETA embraces the migration of performances from live to virtual. Although it may take some time before things return to normal and the curtains rise once again, PETA, along with its partners, strives to make a new kind of stage in this virtual era, where we will continue our advocacies and make meaningful theater. 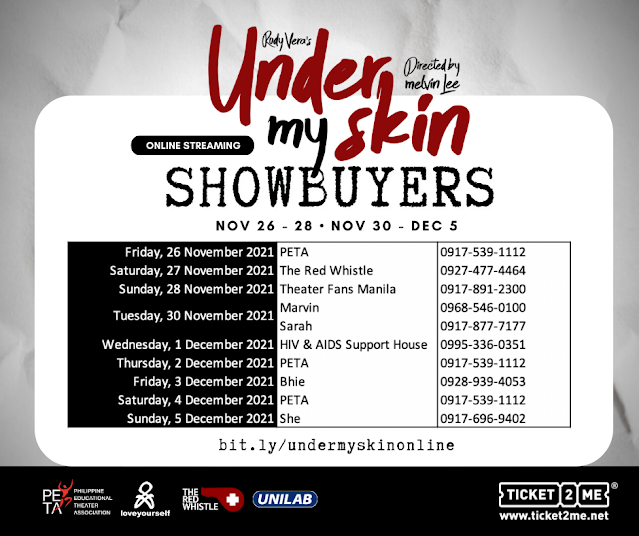 Under My Skin Online runs from November 26 to 28, and November 30 - December 5, 2021. Tickets are available at Php 180 for Livestream, and Php 250 for Video on Demand tickets via www.ticket2me.net, bit.ly/undermyskinonline, or through any of the Under My Skin Online showbuyers. For bulk sales, and more sales information, contact Mitch Go at 0917-5391112.

on October 19, 2021
Email ThisBlogThis!Share to TwitterShare to FacebookShare to Pinterest
Labels: PR and Sponsored