In keeping with its mission to promote sustainability, leading condiments manufacturer and distributor NutriAsia partnered with Plastic Credit Exchange (PCX) for its Datu Puti brand to achieve plastic neutrality.

In a virtual press conference held on 4 October 2021, Datu Puti announced that it has achieved a plastic neutrality certification from PCX. The move to make the entire Datu Puti product line plastic neutral is not only critical for reducing the impact plastic has on the environment, it also allows the iconic brand the opportunity to inspire Filipinos to make more sustainable lifestyle choices through the products they support. “Datu Puti has been a part of many Filipinos’ lives for decades, which is why it was best to start with it as a pioneer brand in sustainability. This puts Datu Puti in a prime position of being a catalyst and a leader of positive change toward a more sustainable world, helping fellow Filipinos adopt a more environment-friendly lifestyle through the products we offer,” said Mario Mendoza, NutriAsia’s Broad Culinary Marketing Group head. 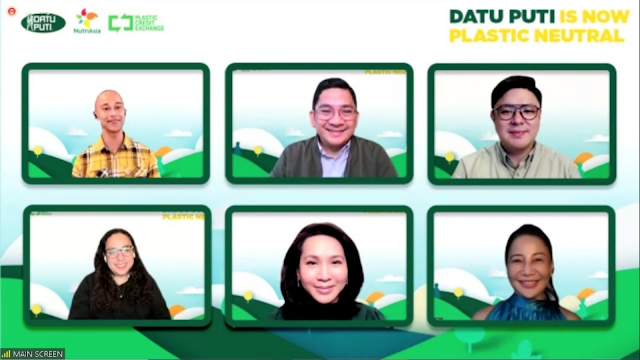 Achieving plastic neutrality entails calculating the plastic usage in Datu Puti’s bottles, bottle caps, cap seals, and stand-up pouches, then through PCX, diverting the equivalent amount of post-consumer plastic from nature. The collected plastic is transformed into an alternative source of energy for creating cement and other products. This provides a more sustainable way of managing plastic waste. “The problem of plastic waste is a concern that we simply cannot take on alone. We congratulate NutriAsia on their important decision and milestone of achieving plastic neutrality with Datu Puti, and we at PCX are happy that the company has chosen to partner with us and take up this noble advocacy,” said Nanette Medved-Po, founder of PCX.

NutriAsia’s efforts to achieve plastic neutrality through Datu Puti amplify the company’s drive for sustainability. Since 2014, the company has been active in sustainability projects like Datu Puti’s Jumbohalang Tambalan, Refill Revolution in partnership with DENR, BYOB (Bring Your Own Bote), the  NutriAsia EcoStation, and Select & Collect. “Systemic and meaningful change often happens as a result of independent and collective actions toward the same goal and direction. NutriAsia’s drives for sustainability and our new partnership with PCX is a testament to our commitment to making the lives of Filipinos even more Masarap and Masaya, both in and outside the kitchen,” said Angie Flaminiano, President and COO of NutriAsia.

Beyond flavouring every Filipino’s dishes with deliciousness, NutriAsia wants to ensure a better and greener world that future generations of Filipinos can savor. As such, the company will remain a committed partner in nation-building efforts towards a more sustainable Philippines.

on October 06, 2021
Email ThisBlogThis!Share to TwitterShare to FacebookShare to Pinterest
Labels: PR and Sponsored