Canon announced today that the company is currently developing the new EOS R3 full-frame mirrorless camera, which will feature a newly developed 35mm full-frame, backlit, stacked CMOS sensor and a DIGIC X image processor. The new camera is designed to provide the high-level basic functionality required to meet the needs of professional and enthusiast users. 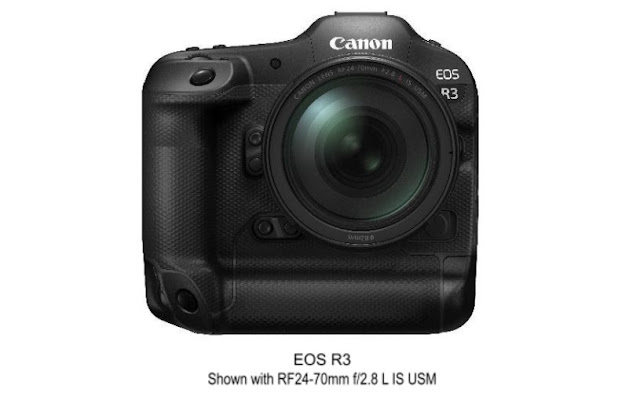 The currently-in-development EOS R3 is based on the concept of high speed, high sensitivity, and high reliability. The EOS R3 will be introduced into Canon’s lineup of professional and enthusiast cameras that includes the EOS-1D X Mark III flagship DSLR camera (released in February 2020) and the EOS 5 series, including the EOS R5 full-frame mirrorless camera (released in July 2020). The EOS R3 aims to provide professional-level quality for both stills and video capture, even for moving subjects.

The EOS R3 is the first EOS series camera to be equipped with Canon’s newly developed 35mm full-frame backlit stacked CMOS sensor that makes possible high-speed readout. The camera also features a DIGIC X image processor for high-speed image processing that realizes high-speed continuous shooting of up to 30 frames-per-second (FPS) with AF/AE tracking when using the electronic shutter. In addition, the camera significantly reduces image warping, a common challenge with electronic shutters, and is also capable of capturing moving subjects with reduced noise in such low-light environments as indoor areas or nighttime scenes.

Alongside Dual Pixel CMOS AF technology—by which each pixel on the image sensor possesses both image capture and phase-detect AF functionality, thus enabling high-speed, high-accuracy and wide-range AF—the EOS R3 uses an algorithm that employs deep learning technology that enables improved head and eye detection for human subjects as well as a new capability to detect subject torsos. Thanks to this enhanced performance, the camera’s autofocus system provides high-performance subject tracking, even during portrait photography and in scenarios with frequent subject movement such as sports. Development is also underway to enable the detection of additional subject types.

In addition, the EOS R3 is Canon’s first digital camera to feature Eye Control AF functionality. When shooting still images and looking through the viewfinder, this new feature enables the AF frame to adjust according to the detected movement of the user’s eye, making possible smoother shooting with quick focus when transitioning between subjects.

The EOS R3 answers the sophisticated needs of professionals by providing dust and water resistance developed with each iteration of the EOS-1 series, body design with integrated vertical hand-grip, reliability and ease of use, as well as compatibility with Canon’s Mobile File Transfer, announced alongside the EOS R3, which supports high-speed workflows.

With the goal of expanding the possibilities of imaging for users, the EOS R system will continue to expand its lineup of impressive cameras and RF lenses.

on April 14, 2021
Email ThisBlogThis!Share to TwitterShare to FacebookShare to Pinterest
Labels: PR and Sponsored