The largest global sports media property in Asian history, ONE Championship™ (ONE), today officially announced ONE: A NEW BREED, a closed-door event scheduled for live global broadcast and livestreaming on Friday, 28 August from Bangkok, Thailand.

Chatri Sityodtong, Chairman and CEO of ONE Championship, stated: “Following the success of the ONE: NO SURRENDER event series in Bangkok, we come right back to the capital of Thailand with another amazing live event. ONE: A NEW BREED will once again showcase the strength and resilience of the human spirit, through the spectacular performances of our ONE Championship athletes.” 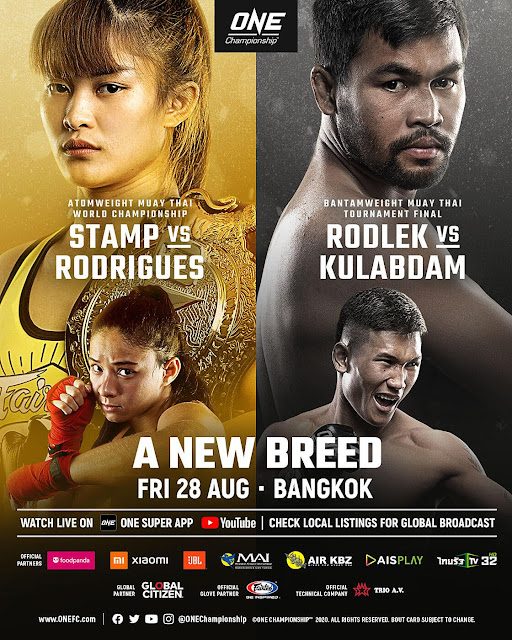 After Kulabdam’s spectacular first-round knockout of Sangmanee Klong SuanPluResort in the semifinal round at ONE: NO SURRENDER III, the 21-year-old phenom will look to replicate his success in the final round of the tournament. The winner will move on to face legend Nong-O Gaiyanghadao for the ONE Bantamweight Muay Thai World Championship.

Stamp Fairtex, ONE Atomweight Muay Thai World Champion, stated: “I am very fortunate to be here in Bangkok, with the ability to showcase my skills for the world to see. I know not all athletes are in the position that I am now, and I count myself blessed to be able to do what I love doing. Coming back so quickly after my recent performance in the ring, I’m still sharp and physically ready to put on another great show. I’m ready to defend my Muay Thai belt. It’s going to stay right here at home in Thailand.

Allycia Hellen Rodrigues, ONE World Title challenger, stated: “It is such a huge honor for me to join ONE Championship, and to receive the opportunity to face the ONE Atomweight Muay Thai World Champion is something I am very grateful for. I am extra motivated in training right now, and working very hard so I come into this bout well prepared. Stamp Fairtex is a tremendous champion, but I’m going to show the world the Brazilian fighting spirit. My goal is to walk out of the arena with that gold belt around my waist.”

Rodlek PK.Saenchaimuaythaigym, ONE Bantamweight Muay Thai Tournament Finalist, stated: “Getting to compete again so quickly is a privilege, since many athletes have been unable to compete due to the pandemic. I am nothing short of grateful for the position that I am in. It is unfortunate, however, that Saemapetch [Fairtex] had to pull out of the tournament due to injury. But I feel I won our last fight anyway, and right now, I’m on to the final round with Kulabdam. It’s one step closer to realizing my dream of becoming a ONE World Champion.

Kulabdam Sor. Jor. Piek Uthai, ONE Bantamweight Muay Thai Tournament Finalist, stated: “I am confident of victory here against Rodlek. I know he’s an experienced fighter, but I’m young and aggressive, with championship experience too. I want to showcase my best skills in this fight. A lot is at stake in this tournament final, so I have to be at my very best if I want to win. I have prepared very hard for this moment and I am ready to put on a show that fans will remember.”

The stacked card also includes many other compelling mixed martial arts and ONE Super Series contests.