Denice Zamboanga to Stay in Thailand, Hoping to Compete in Bangkok Soon

Number one ranked ONE Championship female atomweight Denice “The Menace” Zamboanga is keeping busy in Thailand, training and staying ready in case she gets the call to compete in an upcoming card in Bangkok.

Bouts for ONE Championship’s A NEW BREED events through August and September have yet to be announced, and Zamboanga is holding out hope that she can return to the ONE Circle sooner rather than later. 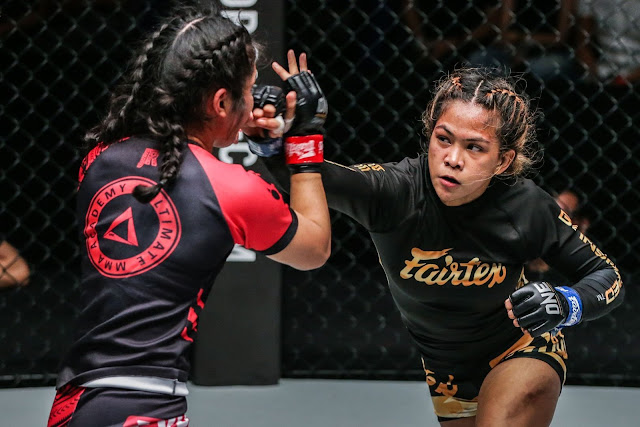 With lockdown restrictions tightening in her native Philippines due to a worsening Covid-19 situation, Zamboanga is left without much of a choice but to stay in Thailand. Accompanying her in the ‘Land of a Thousand Smiles’ is her older brother, Drex, and their friend Fritz Biagtan. Together, they are preparing Zamboanga for a potential upcoming bout.

"Right now I'm just training here in Bangkok with my brother Drex and our friend Fritz Biagtan. I'm very lucky because I can still do what I love to do,” said Zamboanga.

“I just want to stay ready, because anytime, I can get called up to compete now that ONE Championship is hosting events here in Thailand."

ONE Championship successfully returned to its flagship event schedule with ONE: NO SURRENDER last 31 July. The promotion has NO SURRENDER II and NO SURRENDER III coming up on 14 August and 21 August respectively, as well as three more shows lined up in Bangkok on 28 August, 11 September and 18 September.

Zamboanga is hoping to appear on at least one of those cards.

"I really want to fight and compete, so I'm just waiting for that call from ONE Championship. Need to stay as sharp as possible, because the World Title shot is just around the corner,” said Zamboanga.

"Right now, I need to work on my speed. Speed is a great asset to have in the ring. Of course, I'm constantly working on my striking skills and ground game. Thankfully my brother is here to help me."

The 23-year-old rising star also recently revealed that she had parted ways with the Fairtex team in Pattaya to pursue her own ventures.

While at Fairtex, Zamboanga had trained with athletes such as ONE Atomweight Muay Thai World Champion Stamp Fairtex, Nat “Wondergirl Fairtex” Nutchakamon, and Noelle Grandjean. But more than training partners, they had become close friends.

She stresses that there are no ill-feelings between her and Fairtex, and that she will always consider the people she made bonds with there as true allies.

"I love my friends at Fairtex. We are very close. Even though I am no longer with Fairtex, they are all still my friends. Stamp, Nat, Noelle, and all my teammates, and coach DJ. I don't think that bond can be broken,” said Zamboanga.

Although she’s fixated on training, and possibly competing again in the very near future, Zamboanga can’t help but feel homesick and wanting to return to the Philippines to see her family and friends. But with travel restrictions abound, and varying levels of quarantine measures, it has been impossible to move around.

Still, Zamboanga is enthusiastic about being able to return to the Philippines later this year.

"Hopefully before this year ends, and Thailand opens its airports, and I can fly back, I can go home to the Philippines. Right now the situation is really complicated. I really miss home,” said Zamboanga.

"This is all just a big test, but one test that everyone can get through. I just want to say, stay strong everyone. God has a plan and we just have to have faith."

Catch your favorite ONE Championship superstars now on Cignal TV and TV5.

VIDEO A lot of people who can't get the Starbucks 2020 Planner are currently looking at the Mercury 2020 Daybook. They think that it will make for a better planner. The question is, will it? Let's find out. The Mercury 2020 Daybook comes in 4 colors: Gray, Purple, Orange, and Red. This is how it is packaged. This is how the actual Mercury 2020 Daybook looks like. The design is actually carved and gives a nice texture. All 4 colors come with the same front design. Inside, it looks like this. It's actually not a planner but more of an upscale notebook with lots of nice prompts to help you have a better 2020. It reminds you of how to be a better version of yourself. There are no dates inside so if that's what you are looking for, then this is not the notebook for you. If you just need something to guide you through 2020, then at 40 Suki Points, this one is more than enough. To know more and see all the pages, click on this video . Fo