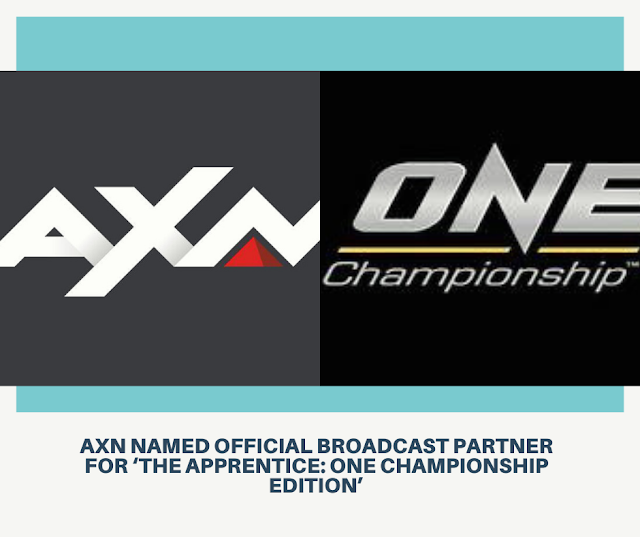 The largest global sports media property in Asian history, ONE Championship™ (ONE), today named AXN the official broadcast partner for The Apprentice: ONE Championship Edition when the hit reality television series airs in early 2021.

ONE also announced an initial list of six additional media and Free-To-Air (FTA) platforms confirmed to collaborate with ONE in commercial and marketing efforts, as well as to air the show during primetime in their respective territories. More international broadcast partners will be announced shortly.

The Apprentice: ONE Championship Edition will be available on:

Sanchit Garg, Senior Vice President of Global Media Partnerships, ONE Championship, stated: “I am thrilled to announce that we have named AXN the official broadcast partner of The Apprentice: ONE Championship Edition in Southeast Asia, bringing the compelling drama and nail-biting reality TV excitement of one of history’s greatest shows to millions of viewers all across the region. AXN is a network known for its top-rated dramas, blockbusters, reality TV and original productions. I am also ecstatic to confirm six additional confirmed Free-to-Air partners to carry the show.”

AXN features exclusive top-rated drama series, blockbuster features, reality programs and ground-breaking original productions, including shows such as The Amazing Race Asia, The Apprentice Asia, Asia’s Got Talent, Cash Cab, and The Contender Asia, among others.

Avani Bhanchawat, Vice President & Head, Revenue, KC Global Media Asia, which owns AXN, stated: “Our strategic partnership with ONE Championship enables audiences across the region to experience the high-stakes challenges for the first time. The Apprentice: ONE Championship Edition adds to AXN’s stable of exclusive top-rated reality programs and ground-breaking original productions. Our partnership in this programme is a strong testament of AXN’s commitment to building, and grooming the development of entrepreneurs with great physical and mental agility, to thrive in today’s business environment and raise the bar for business leadership.”

The Apprentice: ONE Championship Edition invites sixteen (16) contestants handpicked from around the world to compete in a high-stakes game of business and physical challenges. The winner will receive a US$250,000 job offer to work directly under Chairman and CEO Chatri Sityodtong for a year as his protege in Singapore.

ONE Championship’s unique take on the hit reality TV series includes appearances from 12 guest CEOs (one CEO per episode) from the world’s largest companies. Among the CEOs confirmed to join the first season so far are Zilingo CEO Ankiti Bose, Catcha Group and iFlix CEO Patrick Grove, Grab CEO Anthony Tan, and Everise CEO Sudhir Agarwal. More CEOs will be announced at a later date.

In addition, 12 superstar athletes and World Champions (one per episode) will also guest star on the show. They will participate with contestants in tests of athletic ability and cardio endurance.

'The Apprentice' is one of the world's biggest non-scripted reality TV programs in history that judges the business skills of a group of contestants competing for a job offer with a high-profile CEO. It has aired in over 120 countries. The first season of 'The Apprentice: ONE Championship Edition' will consist of a total of 13 episodes.

For more information on The Apprentice: ONE Championship Edition, please visit: http://onefc.com/the-apprentice/