The first thing he said to me when I entered his car was "you look so pretty!" I smiled of course. The next thing he said was, "Sorry. Everything I planned for today fell through." Of course I did not smile but I understood.

Unfortunately, from that point on, it kind of went downhill. He had some things he needed to tend to and ended up being on the phone almost all the way to the mall where we were eating. Yep, we ate at a mall. When he wasn't on the phone or thinking about the situation, he was apologizing incessantly.

I was disappointed because he knew that Valentines was one of those things that I really liked and I felt that he didn't try as much as he should. I mean, how can all his plans fall through? It didn't make sense to me. Add that I didn't have his complete attention and it resulted to a very upset me.

Walking around MOA he commented that it seems there wasn't a lot of people. I replied with dripping sarcasm that it really wasn't the most romantic place on Earth. It wouldn't even make top 100 or top 1000. I knew it was wrong to say but I was disappointed. Majorly disappointed.

Last year's pre-Valentine date showed effort and thought. I guess I was hoping that this year would be better since it was our first as a couple. This was my mistake. I shouldn't have expected. It was unfair to FM but at the same time, I couldn't help it. It was Valentines.

During dinner at Watami, it was a hit and miss. Some of the food served were pretty good while some were pretty lacking. FM and I, we were also a hit and miss during dinner. We had moments where we were sweet and okay and we had a moment where I was just really upset and he was really quiet. 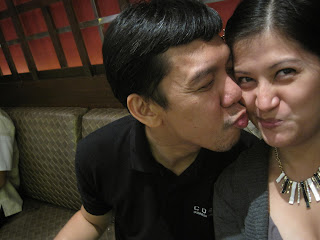 After dinner, things finally took a turn for the better. We were walking when he told me what his original gift was for me. Apparently, it was a giant teddy bear. Unfortunately, the store where he planned to buy it closed. I told him there was another bear shop in MOA and we trooped over there. He ended up buying me the biggest teddy bear in the store and 3 roses. 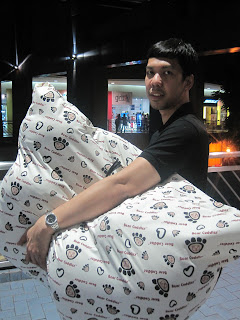 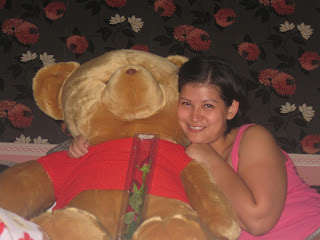 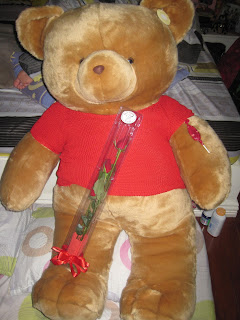 How can you not possibly forgive him after receiving those? Even someone as heartless as I am melts.

The date may not have started as ideally as I imagined it would but it definitely ended the way I had hoped. FM and I had fun and we enjoyed our date. The Valentines date we had was actually a reflection of what our relationship is like. Lots of misunderstanding filled with good intentions, sorted out by love and patience. Love from me, patience from him. =) 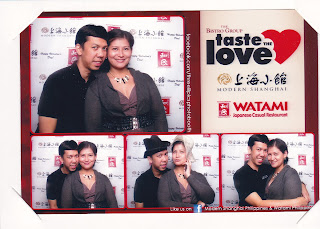